Availability: 6 in stock (can be backordered)

The D24V25Fx family of step-down voltage regulators generates lower output voltages from input voltages as high as 38 V. They are switching regulators (also called switched-mode power supplies (SMPS) or DC-to-DC converters) with typical efficiencies between 85% and 95%, which is much more efficient than linear voltage regulators, especially when the difference between the input and output voltage is large. The available output current is a function of the input voltage and efficiency (see the Typical efficiency and output current section below), but the output current can typically be as high as 2.5 A.

At light loads, the switching frequency automatically changes to maintain high efficiencies. These regulators have a typical quiescent (no load) current draw of less than 1 mA, and the ENABLE pin can be used to put the boards in a low-power state that reduces the quiescent current to approximately 10 µA to 20 µA per volt on VIN.

The modules have built-in reverse-voltage protection, short-circuit protection, a thermal shutdown feature that helps prevent damage from overheating, and a soft-start feature that reduces inrush current.

The different voltage versions of this regulator all look very similar, so you should consider adding your own distinguishing marks or labels if you will be working simultaneously with multiple versions. This product page applies to all versions of the D24V25Fx family.

For higher-power applications, we carry a slightly larger, pin-compatible, 5 V version of this regulator that has a typical maximum output current of 5 A. 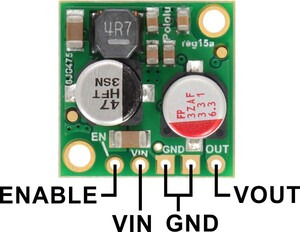 The regulator is enabled by default: a 100 kΩ pull-up resistor on the board connects the ENABLE pin to reverse-protected VIN. The ENABLE pin can be driven low (under 0.6 V) to put the board into a low-power state. The quiescent current draw in this sleep mode is dominated by the current in the pull-up resistor from ENABLE to VIN and by the reverse-voltage protection circuit, which will draw between 10 µA and 20 µA per volt on VIN when ENABLE is held low. If you do not need this feature, you should leave the ENABLE pin disconnected. 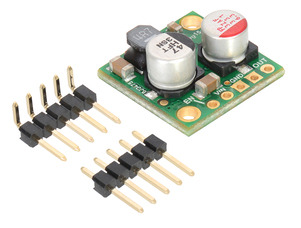 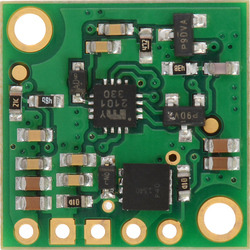 The five connection points are labeled on the top of the PCB and are arranged with a 0.1″ spacing for compatibility with solderless breadboards, connectors, and other prototyping arrangements that use a 0.1″ grid. Either the included 5×1 straight male header strip or the 5×1 right angle male header strip can be soldered into these holes. For the most compact installation, you can solder wires directly to the board. 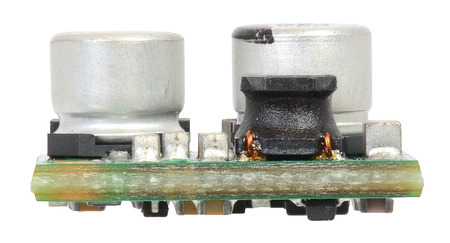 The board has two 0.086″ mounting holes intended for #2 or M2 screws. The mounting holes are at opposite corners of the board and are separated by 0.53″ both horizontally and vertically.

The efficiency of a voltage regulator, defined as (Power out)/(Power in), is an important measure of its performance, especially when battery life or heat are concerns. This family of switching regulators typically has an efficiency of 85% to 95%, though the actual efficiency in a given system depends on input voltage, output voltage, and output current. See the efficiency graph near the bottom of this page for more information.

The maximum achievable output current is typically around 2.5 A, but this depends on many factors, including the ambient temperature, air flow, heat sinking, and the input and output voltage.

The regulator generally operates at a switching frequency of around 600 kHz, but the frequency drops when encountering a light load to improve efficiency. This could make it harder to filter out noise on the output caused by switching.

The graphs below show the typical efficiency and dropout voltage of the 6 V D24V25F6 regulator as a function of the output current: 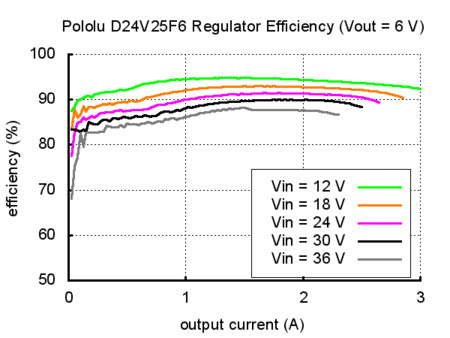 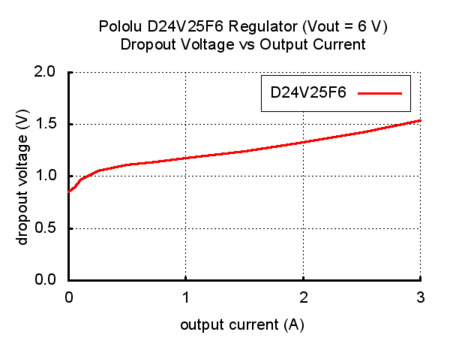 During normal operation, this product can get hot enough to burn you. Take care when handling this product or other components connected to it.

The over-current limit of the regulator operates on a combination of current and temperature: the current threshold decreases as the regulator temperature goes up. However, there might be some operating points at low input voltages and high output currents (well over 2.5 A) where the current is just under the limit and the regulator might not shut off before damage occurs. If you are using this regulator in an application where the input voltage is near the lower limit and the load could exceed 3.5A for sustained periods (more than five seconds), consider using additional protective components such as fuses or circuit breakers.

There are no reviews yet.